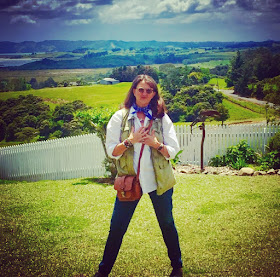 Just months after Becky Aud-Jennison's dear brother died of brain cancer she began to plan staging The Vagina Monologues for V-Day-- an international protest against violence.

The thought came to her and aligned with the tattoo she'd gotten before she headed back to the states after being with her brother-- wwmd-- what would Max do: we need to have the same types of conversations that The Vagina Monlogues bravely created surrounding Death.

We need to get Death out of the closet.

Having yet to dive deeply into the death awareness culture, little did she know that given our dying population is now consisting of the Woodstock generation: the times, they are a'changin.

There is an international movement of taking ownership of death and being more open about all topics surrounding death.

Conversely, the overall majority continue to walk through life as if they can hide from Death. Feelings and conversations surrounding loss and grief are stifled because our overall culture hasn't made its peace with accepting Death as part of living.

The concept of The Death Dialogues Project was born, fully knowing that her soulmate social activist brother would be on a similar path had Becky died first, and a few months later, her mother who was living with her also died.

With both of these deaths Becky served as death doula and beautiful vigil was held in the homes, reframing what death looked like in her family.  Becky had also been at the bedside of her father when he died of a brain aneurism when she was 22.

You can hear Becky as a guest on the podcast And Then Everything Changed where she goes into more depth or read her three part series on these deaths here: http://beckonbalance.blogspot.com/2018/03/part-1-rude-awakeningplease-dont-take.html?m=1.

Without judgment regarding whatever paths people choose, with a lifelong career in the helping professions, Becky realizes that we learn much more from each others' stories than we do from a professional or book.

A love of verbatim theatre fueled the initial concept for The Death Dialogues Project and interviews began to create verbatim pieces.

Since then a podcast The Death Dialogues Project Podcast has also been created to further these conversations globally.

Since its inception in 2018 the project has staged two critically acclaimed productions based on verbatim stories, provided a workshop surrounding Death planning and is in the second year of a well received podcast.

Becky has begun a writing project based on what Death and Life has taught her, through her own experiences and the stories of others.

You can find The Death Dialogues Project Podcast on all your favourite podcast platforms (shown in right hand column) and on Instagram and Facebook.

Thank you for finding The Death Dialogues Project.

We'll leave the light on for you.